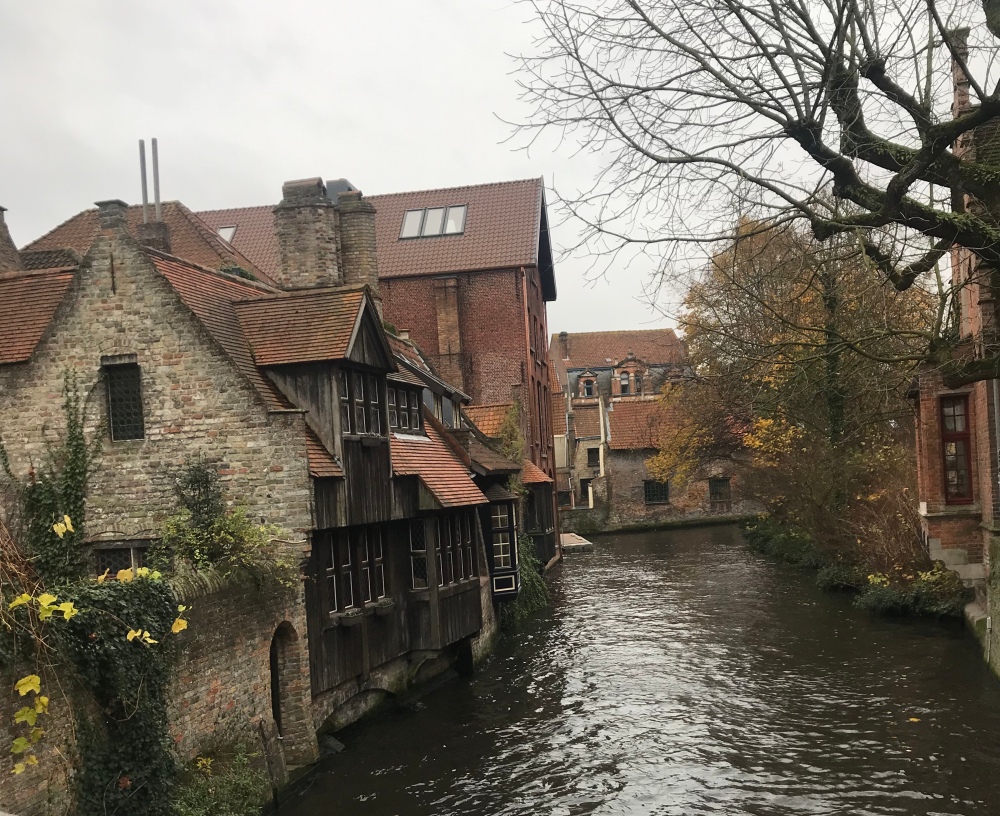 If you have a child fond of consuming only beige and sugary fare, a child who laughs in the face of ‘eating the rainbow,’ then you should put Bruges on your ‘Where would be a nice place to take the kids where they won’t moan’ list. Not wishing to trivialise the many experiences on offer for a family in this fine, picture-perfect, Hans Christian Andersony looking city, but it would be remiss of me to not make the observation that Bruges does offer, in abundance, the three main food groups for children – waffles, fries and chocolate – and so, perhaps on food alone, it’s a great place for a city break with kids. They’ll be no bribery needed, you won’t have coax your children to try the national cuisine with the promise of an ice cream if they take one reluctant bite. There’ll be no, “Come on Hugo, eat the putrefied shark for mummy” or “The pork is supposed to be pink, Tallulah.” Ain’t nothing challenging about the menus here. Every street is throbbing with chocolatiers, waffle..atiers, frite carts and sweet shops nestled in the ground floors of what look like gingerbread houses. Basically, if your entire family’s cheeks aren’t caked with sugar for the duration of your time there, then you’re doing something wrong.

Bruges frequently features in those ‘Most picturesque cities on Earth’ type lists and with its fairy-tale architecture, romantic old bridges and sleepy canals it’s a worthy contender. They (they) call it the Venice of the North, which I guess if you squint and imagine you’re wearing a Breton t-shirt instead of a fleece-lined cagoule, and sipping an aperol spritz watching the gondolas in the Italian sunshine rather than wrestling with a child in the rain then yes, yes it is like Venice. It does have an awful lot of tourists like Venice, and at only an hour and a half’s drive from Calais, a lot of them are from the UK. It’s a super easy trip to make from London – Saturdays are especially busy so it’s worth booking restaurants and museum tickets in advance. We travelled down to Folkstone and on to Calais on the Eurotunnel – by far the cheapest and less faffy option.

We visited for two nights in December. I can imagine the city is glorious in every season although a winter visit is especially atmospheric in a kind of final chapter of A Christmas Carol Dickensian kind of a way. If you love a sparkling festoon light, a gallon of gluwein and a market square crammed with stalls selling handmade gifts and artisan chocolates then Christmas is definitely the season for you. It’s worth pointing out that warmer temperatures would open up far more options for a weekend break for a family; a less rainy and cold visit would’ve seen us spend more time outside, hiring bikes and exploring the countryside, so a trip when it’s warmer would be great too. 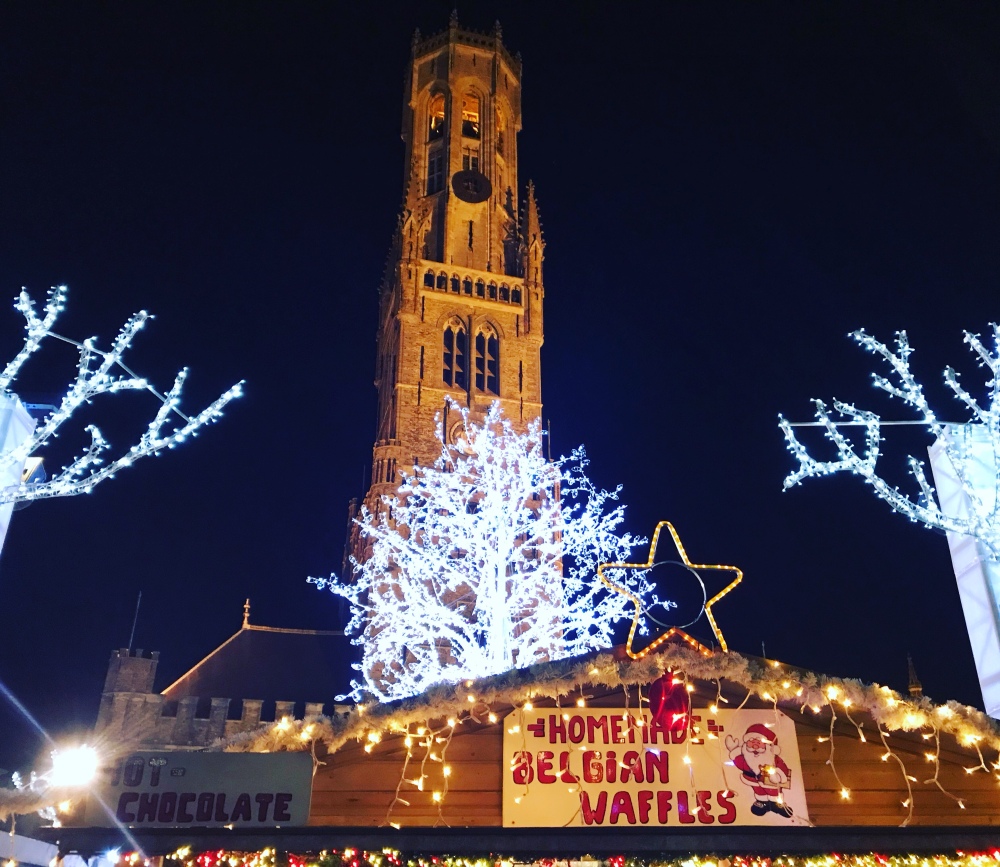 The city is totally walkable which makes it great for kids; take a brolly and a flat shoe and start your day by heading to the Market Square where you can get a horse and cart ride around the city to get your bearings. It’s not necessary unless you really want the experience, but I can think of worse ways to spend half an hour. I’d actually advise doing this when the sun sets as a pre or post dinner treat, as Bruges is especially atmospheric at night. Most horse and cart rides take a stop at Minnewater Lake where you can watch the swans and walk around the grounds of the Beguinage, home to the Benedictine nuns. Frazzled parents may take a moment here to consider their life choices – the option of a life of silence, making lace and planting begonias may seem dangerously appealing. Grab a waffle here before heading back to the Market Square where you can visit the Belfry courtyard before climbing its 366 steps for a great view of the city – film fans will know this as the location of the suicide scene in the film “In Bruges.” Cheery.

If the weather is good, you can take a boat trip along the canals and see the city from the water. Smaller cities are great for getting lost in and Bruges is no exception, wandering down hidden passageways and cobbled back streets we found little footbridges and candlelit bars and secret garden spaces. 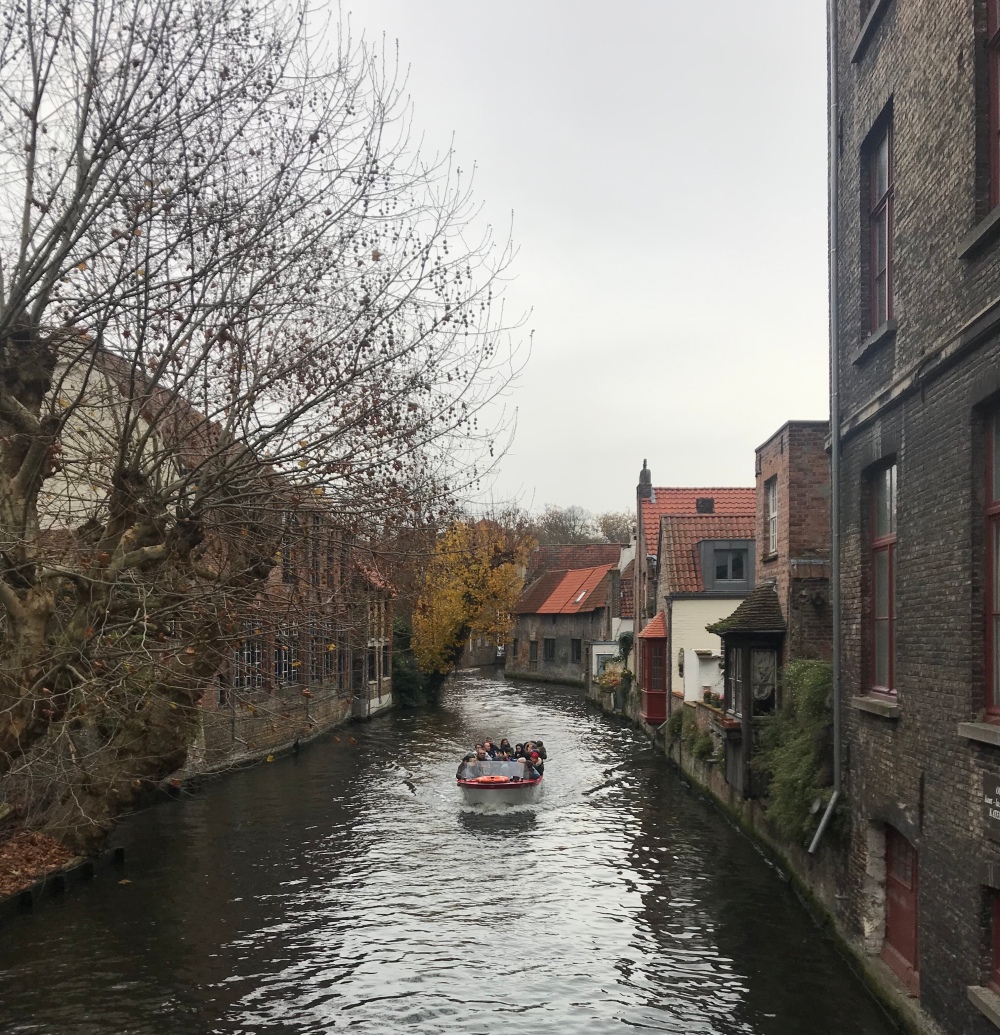 The following day, you can head to a brewery for some beer tasting, before hiring a bike or walking up to the old city borders to see the windmills. Head to the Chocolate Line  to watch a real-life chocolatier at work, and pick up some handmade Belgian chocolate for everyone in your life. 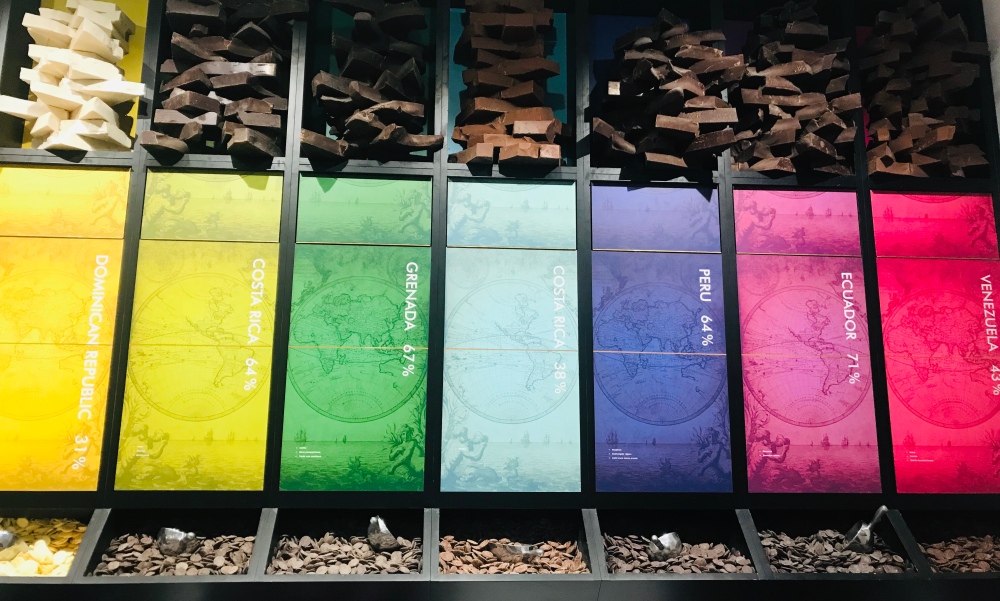 The food in Bruges is excellent – on the first evening we went to what would be considered a touristy restaurant on the main square, Le Panier d’Or. Overlooking the Belfry, location was everything here and it worked well for our first night. We ate stew and mussels by a roaring fire and I have no recollection of what the children ate because there was inexplicably cheap champagne. On the second night we went to De Koetse which was also wonderful. Both were child-friendly in as much as the kids ate stuff quite happily and no other diners regarded them with the type of expression normally reserved for when one accidentally steps in dog poo. Both restaurants receive bonus points for a providing free appetizers along with the aperitif. Other restaurants that looked excellent and were recommended to us were Bistro Pro Deo, Gruuthouse Hof and Kok au vin.

There are millions of places to stay. We stayed at the perfectly reasonable Hotel Academie, close to Minnewater Lake. I’d Airbnb overlooking a canal if I had my time again.

Not wishing to harsh on anyone’s mellow here but anyone who has kids really should take them to visit a World War 1 battlefield given that, you know, kids need to learn that life isn’t all waffles and ice cream. It’s really worth taking a detour on the way back to the tunnel in the morning to visit Ypres if you can. Here you can visit the Flanders Fields museum and the Menin Gate, the latter bearing the names of almost 55,000 missing Commonwealth soldiers who died in the area during the First World War. It’s sobering to think of the soldiers walking through what is now the main high street of Ypres on their way to the battlefields.